The historical-cultural complex Niavaran is located in a large garden of approximately 11 hectares north of Tehrān, it is very beautiful and constitutes a natural and historical attraction. The buildings of this complex belong to the qajaro and pahlavi period.

At the beginning the qajari kings chose this place with a favorable climate as their summer residence. Fath Ali Shāh Qājār for recreational purposes ordered a nice garden to be built in an area with a mild climate outside the city of Tehrān, whose extension was much smaller than today.

It was located next to a village called "Gorde Vey" or "Gorde Beh" in today's Niāvarān where instead of a reed bed the garden was created which was given the name "Ney āvarān" which later became known as "Niavaran".

Mohammad Shāh in the same garden also built a small, simple building and built the "Sāheb Qarānyeh" palace to imitate it. The last building built in the qajaro period in this garden is known as Ahmad Shāhi Palace.

During the reign of the second Pahlavi, some small buildings of this garden were destroyed and the Niāvarān palace was built with a modern style as an imperial residence.

The historical-cultural complex of Niāvarān has a conservation and restoration unit whose duty is to preserve all the works of the palaces and museums. This complex also has a documentation center in which contemporary historical documents of Niavaran palaces are collected, documents such as:

Album of negatives, slides, a collection of various photo albums of which most belong to the period of the second Pahlavi and some also to the period of the first Pahlavi whose subjects are the characters, the Pahlavi family, official events and ceremonies, the coronation, the historical buildings, the specific handwriting of the second Pahlavi family and also the documents related to the court's internal affairs, the gramophone records and the audio cassettes of classical, jazz, traditional and Iranian pop musical works, stories, poems, children's songs and contemporary literature such as the poems of Nimā Youshij, Akhavān Sales and Jahān, video footage of the Niāvarān palaces and official ceremonies.

This complex also hosts cultural programs and activities such as workshops, scientific and cultural meetings and seminars, local and foreign art exhibitions 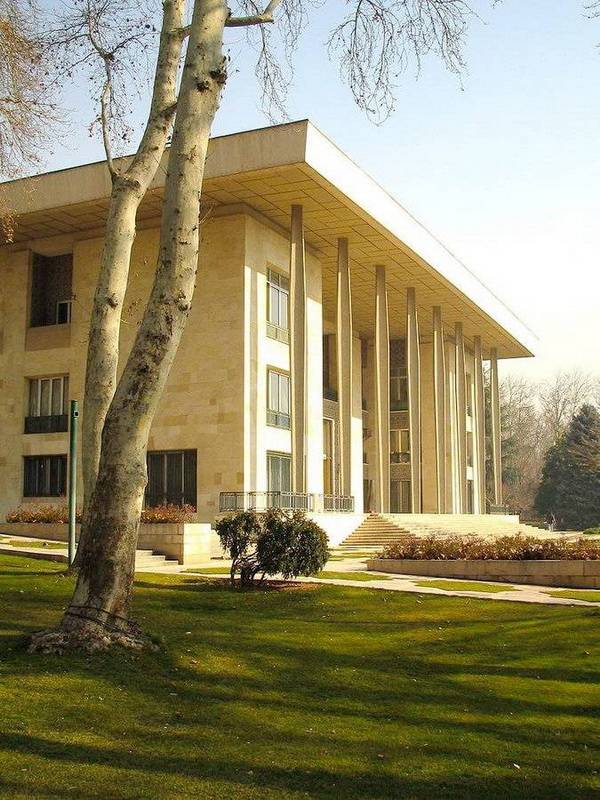 In the north-east corner of the Niāvaran Garden is the homonymous palace with a surface of about 9000 two-storey square meters and a half-floor whose construction work began in the year of the solar Hegira 1337 on the basis of a Iranian project.

At the beginning this palace was conceived as a place for the monarchical reception and residence for the high level guests of the court but during the executive operations underwent changes in the function and was used as a place of residence of Mohammad Rezā Pahlavi and his family and it remained the main site of the imperial headquarters.

The quadrangular plan of the building and the creation of the internal architectural space is inspired by Iranian architecture with the use of modern technology. Even its decorations are a combination of pre and post Islamic art where the stucco work, mirrors and the tiling of the exterior facade are a masterpiece of Iranian artists.

The ground floor of this building includes a large vestibule from which all the rooms around it were formed; among those you can mention the private cinema, the dining room, the reception hall, the waiting room, the secondary corridors and also the blue hall.

In the middle floor of this building is the study, the conference room, the office, the bedroom and the chamber of the court ladies.
On the third floor is the bedroom and the resting place of Mohammad Rezā Pahlavi, the make-up and wardrobe room of Farah Dibā and also the rooms of the sons of the king and their nannies.

At the end of the tour there is a room in the staircase where the official and military uniforms, medals and awards of Mohammad Rezā Pahlavi are kept.
A precious collection of paintings by Iranian and foreign artists, porcelain and decorative objects as well as a collection of fine Iranian rugs embellish these environments.

Library of the Niyavaran Palace