Shah Ceragh, is a solemn place of pilgrimage in the city of Shirāz (Fārs region) where Mir Seyed Ahmad Ben Musa Kāzem (A), known as Shāh Cerāgh, eldest son of Imam Musa Kāzem (A), seventh Imam of the Shiites and Mohammad Ben Musa (A), brothers of Ali Ben Musa Al Rezā (A).
This building was built in the Atābakān period in the sixth century of the lunar Hegira and the dome and the audience hall have beautiful tile work. The building of this sacred place includes: a iwān and a large mausoleum placed behind in whose four sides there are 4 shāhneshin and behind that a mosque was also built. 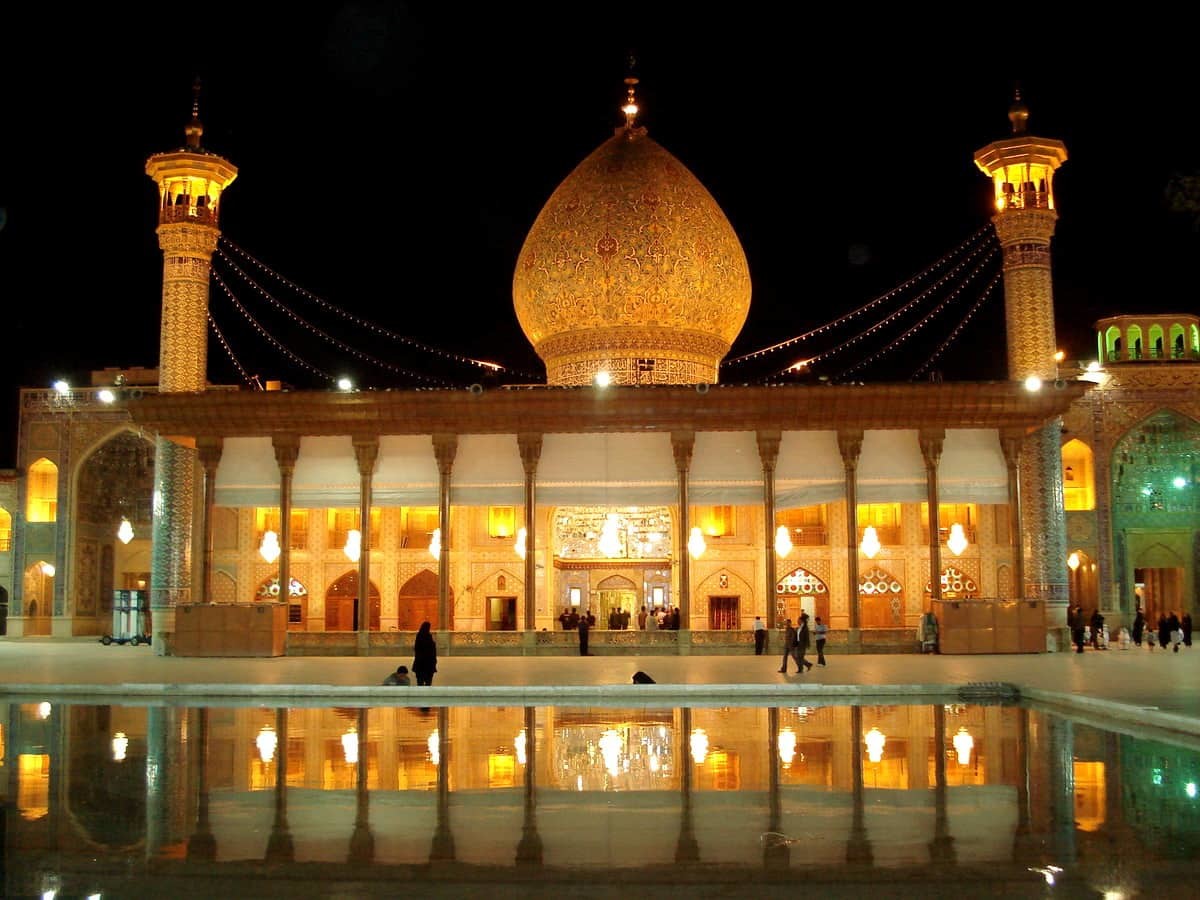 So far, the sepulcher and its coatings have taken on different aspects but the zarih (metal grille above the tomb) is made entirely of silver and has been decorated with gold leaves on top of it. Inside the zarih, above the sepulcher is a very nice cassette worked with the wood carving technique (khātam). The interior columns and ceiling of the zarih are decorated with khātam and wood.
The carving work inside this zarih was performed in the XIRUMX year of the solar Hegira in the sacred region factory.
The courtyard today has six entrance doors, two main ones with two large sardares decorated with majolica tiles, a large basin with a fountain and some trees have been planted around the pool.
The iron columns of the iwān of the mausoleum are covered with fine wood and the wood carving technique has also been used in the flat ceiling. Except for the two main gates, there are also two secondary doors, one of which is on the Hāji bazaar and the other on the Jāmeh Atigh mosque.
The mausoleum has seven main entrance doors in the courtyard. The interior with the use of subtle colored mirrors has been decorated with artistic lightness and various types of beautiful Persian and Arabic calligraphy adorn the facade around the mirrors and the tiles.
The current doors of this mausoleum are of gold and silver and the ancient doors are kept in the museum. Even the dome of the mausoleum of Hazrat-e Shāh Cerāgh (A) has often been destroyed and restored; the current tiled dome of this shrine is one of the most beautiful in the world with its two sumptuous majolica goldaste, has given the city of Shirāz a particular beauty and magnificence.
This complex, which in the course of history has been considered a center for the growth of Shiite culture in the south of the country, has been damaged several times due to the earthquake and has been rebuilt and restored and over time decorations have been added and almost 100 years ago the complete mirror works on the walls inside the mausoleum were carried out.
This sanctuary has a two-storey museum in which more than 4 thousand objects of historical and cultural value are preserved, all fruit of donations, gifts and charity such as earthenware, metal objects, weapons of war and swords related to the period of the Shāh Abbās safavide and to the qajar dynasty, pots of iron and enamelled (minākāri, flat and raised) usually dating back to the qajaro period, a public fountain of qajara bronze, knives with gold work, candlesticks, jewels etc..and a collection of coins from the and sasanide on, manuscripts and documents donated to the mausoleum, traditional silver doors and khātam, very ancient Korans.
The Shāh Cerāgh shrine, which is the largest religious pilgrimage site in Shirāz, is highly revered by the inhabitants of the city and people from all over Iran and from the Shiite countries go there on pilgrimage to invoke blessing and relief.
To share
Healthy Eating
We use cookies to ensure that we give you the best experience on our website. If you continue to use this site we will assume that you are happy with it. Ok