The Kerman region is located in the south-east of Iran, has a typical vegetation of the desert areas and is the second largest region of the country. The capital of the region is the historical city of Kerman and the other major population centers are: Baft, Bardsir, Bam, Jiroft, Rafsanjan, Zarand, Sirjan, Shahr-e Babak and Kahnuj.

The variable height of the geographical context - in other words the presence of reliefs and depressions - determines numerous and specific climatic conditions in the various locations of the Kerman region. The areas located to the north, north-west and in a part of the central areas of the region have a dry and temperate climate. In the territories of the south and south-east there is a warm-humid climate. In the central area, or around the city of Kerman, the climate is dry and relatively temperate. The time frame included in the month of Farvardin (21 March-22 April) in the month of Tir (21 June-22 July) is the best time of year to visit this region.

Human settlements in the Kerman region date back to a period dating back to the end of the 5th millennium BC. C. and in this regard we can mention the sites of Tell Iblis and Yahya Tepe. This region is one of the oldest areas of the country, where, over the centuries, precious cultural and historical works have emerged that have shown the many faces of the civilization of Iran. The name of Kerman in the pre-Islamic era was 'Butia' and 'Carmania'. The Arab and Hebrew historians believed in the existence of a character called 'Kerman' son of 'Hital' or 'Heptal', one of Noah's descendants, instead in the Persian texts the legendary king Tahmuras is remembered as an ancestor of ' Kerman '. The Greek historian Herodotus mentions the name of six peoples of Persian lineage, one of these being the 'Ghermani'. In ancient times, the center of Kerman was called 'Gavashir' and 'Bardashir'. Originally the name of 'Gavashir' was 'Shahr-e Ardashir' ('the city of Ardashir') and progressively became 'Gavashir', this name is registered in the inscriptions of the Bisotun site in the form of 'Yutiye'. Every historical context of the Kerman region reveals a part of the aspects and characteristics of the life of the people and of the local governments of this district. 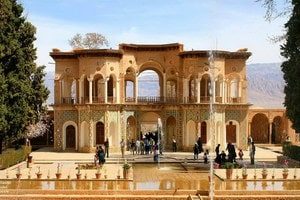 The main handicrafts and souvenirs typical of the Kerman region are: Kashmir fabrics, shawls, carpets, kilims, enamelled objects, copper pottery, a type of dried fruit called Qavut, the sweet Samanu and the dates of Bam. Also the pistachios of Kerman and Rafsanjan are among the most characteristic souvenirs of this region that have a worldwide reputation. Furthermore, it is important to remember medicinal plants - such as henna, lotus flower and dredging gum - and the distilled natural perfumes produced in the Kerman region.