The region of Hamadan is one of the historical areas of Iran and is considered one of the oldest centers of civilization. The results of the studies and archaeological excavations at the site of Tepe Giyan, near Nahavand, show that, six thousand years ago, the populations of this territory had a relatively advanced civilization. In the earliest rock inscriptions of the Assyrians, today's area of ​​Hamadan was mentioned with the term 'Akasaya', that is to say 'the land of the Cassites', and this shows that the history of the civilization of the city of Hamadan dates back to at least the 3rd millennium b. C. The Greek historian Herodotus also reports some news about the Medes and the Hamadan area, and the following emerge from his texts. At the end of the VIII century a. C., the Medes, led by a personality named Dayakku (Deioces in Greek), were able to constitute a political and military entity that was realized in the first powerful government of the Iranian plateau. The city of Ecbatana - the ancient name of Hamadan - was chosen as the capital of the empire and, by order of Dayakku, huge fortifications were built. According to the opinion of most historians and archaeologists, it seems that the hill of Tepe Hegmatane (Ecbatana), in today's city of Hamadan, is the remains of some parts of the fortifications of that period. In the days of the Achaemenids, the city of Ecbatana was one of the three capitals of this dynasty.
At the time of the parties, their principal capital was the city of Ctesiphon, while Ecbatana became the seat of the residence and summer capital of the rulers of the arsacid dynasty. In the Sasanian period, Ecbatana was one of the many sites of the mint of the empire, in fact, many coins of this era were discovered there. With the Arab conquest of Iran, the city of Hamadan also fell into Muslim hands and this episode was so important that, after the triumph of the battle of Nahavand, it was considered the most important victory over the Sassanids. In historical sources of the Islamic period, this city was definitely referred to as 'Hamadan', was considered to be the oldest center of the 'Jibal' region and its age was traced back to a legendary Iranian era. In the 6th century of the lunar ego, the Seljuks moved their capital from Baghdad to this city. During the reign of the Timurids in Iran, the city of Hamadan was destroyed. In the Safavid era, it was rebuilt and returned prosperous, but after the fall of this dynasty, it was conquered by Ahmad Pasha and became an Ottoman governorate. Later, Nader Shah succeeded in driving out the invaders and, with the ratification of a treaty, the city of Hamadan returned to the territories of Iran.

The Hamadan region is located in the western territories of Iran, is a mountainous area, with a high altitude, cold and breezy. The capital of the region is the city of Hamadan and other major urban centers are: Asad Abad, Bahar, Touyserkan, Razan, Kabudar Ahang, Malayer and Nahavand.

This region presents climatic conditions that are altogether variable because of the existence of high mountains, of numerous rivers and springs, of water, and of many plateaus and lowlands. So in the northern valleys of Mount Elvand there is a cold climate and in the central valleys of the region there is a temperate climate. The winter seasons of this region are cold with heavy snowfalls and rains, while the summer seasons are mild.

The images of this section are in the updating phase and will be published as soon as possible.

Mausoleum of the Prophet Abacuc 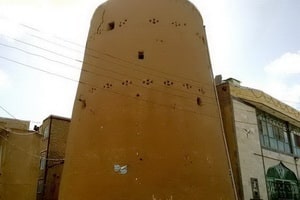