In the footsteps of Antonio Raffaele Giannuzzi between Italy and Iran.

A hyperbole to define Antonio Raffaele Giannuzzi as the "Marco Polo" of the city of the Sassi, but up to a certain point. The story of a Materan general of the Shah of Persia in the period of the Qajar dynasty smells of Orient and adventure. But let's go in order. On the occasion of the celebrations dedicated to the Unification of Italy, the city, through the proposition of a series of unpublished documents, has rediscovered the life worthy of a novel of the only Lucan who participated in the expedition of the Thousand, Giambattista Pentasuglia.

The same thing could be said for Antonio Raffaele Giannuzzi, born in Matera in 1818.

Like Pentasuglia, he participated in the First War of Independence. While the Neapolitan contingent sent to support Carlo Alberto was called back to him, he went ahead, followed General Guglielmo Pepe. He was a volunteer in the Venetian-Neapolitan Legion, 1848-49. Indicative choice of the type of life he led up to his death in Tehran in the 1876.

In the defense of the Republic of Daniele Manin and Niccolò Tommaseo, conquered at the end of August by the Austrians by the 1848, Giannuzzi matriculation number 13, was promoted to non-commissioned officer. But in Venice it also became a proscribed. There followed the fate of many exiles headed for Malta or, through Corfu, in Greece. With the Calabrian officer of Sanbiase, today a municipality of Lamezia Terme, Francesco Matarazzo, Luigi Pesce and Benedetto Barbara, Giannuzzi embarked on the Augustine 21 "Buon Sorte". After making a stop in Brindisi, on October 1848 the landing in Patras, then, on the trail of those who had fought for the independence of Greece, the transfer to Athens.

Here, the exiles usually came into contact with British agents who, in September of 1850, in all probability, sent Giannuzzi and the others to Constantinople. Ambassador Lord Stradfort de Rédcliff received them. They learned that they could have joined the Ottoman army without the obligation to embrace the Islamic faith; however, as the Koran forbade obeying foreign soldiers, they should have assumed the Muslim surname. They weren't so desperate as to have to escape from their past to that point.

Through the Legation of Persia in Constantinople they opted for the more distant Tehran. They chose a reality that did not impose humiliating conditions on their status as exiles, or a country that, through the Qajar dynasty, was opening up to the west. They were hired as instructors of the royal army, quickly making themselves known. Giannuzzi in the 1856 obtained the degrees of Yavar, major, and in the 1860 of colonel. On the death of Luigi Pesce he took his place assuming the position of commander in chief of the European instructors of the infantry regia, finally, he was promoted Sertipe, or General.

Protagonist of the cultural vivacity of Iran at the time was the Scià Naseroddin, the first Persian ruler to visit Europe, where he discovered a technology in those early years, photography. The sovereign who opened the Dar al Funoon polytechnic, the first modern univerity of Tehran, thought well of documenting not only with drawings and written reports the state of health of his land, but making ample use of a medium that did not lie and until then unknown in his country. In the 1858, he organized a series of missions. At their head were Luigi Pesce and Antonio Giannuzzi.

Pioneers through which the West discovered very rare images of an unknown land. Although little known, it is a page that has entered the history of photography of all time. Important for Iran, because these are its first photographic documents. Notable for Italy because it made Persia known in the world, also through subsequent expeditions. Giannuzzi contributed decisively to writing this exciting story, which is now clear, he was also the first photographer and documentary filmmaker from Matera.

The present exhibition presents images of the sacred places in the city of Mashhad accompanied by the collection, containing ten photos by Antonio Raffaele Giannuzzi, preserved in the archive of Palazzo Golestan in Iran.

We thank dott. Pasquale Doria for his precious contribution to the realization of this project.

At the hypogeum of Piazza di San Francesco in Matera 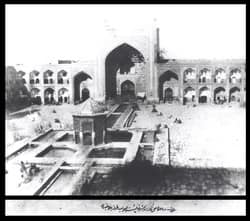 To share
2019
Activities, Italy News
We use cookies to ensure that we give you the best experience on our website. If you continue to use this site we will assume that you are happy with it. Ok