La literary tradition that defines itself as neo-Neopersian literature finds its roots in the culture of ancient Persia, redefined and recalibrated in the post-Islamic period. It is a customary mistake to treat Neopersian literature as a period detached from the rest of a thousand-year history, extolling the role of the advent of Islam in the formation of a literary tradition in the Neo-Spanian language. This particular vision, among other things, derives from the fact that the pre-Islamic poetry of Persia, which has survived until today, does not have the same metric form as the post-Islamic one, just as the metric of the Italian vernacular lyric is different from that of the written in classical Latin. Problems of this kind have led some researchers to affirm that the Persians before Islamization did not know the poetic art, and only thanks to the intervention of the Arab culture they could learn poetry.

This theory is also supported by some modern Persian authors, who for religious reasons attributed all the glory of the Persian post-Islamic culture to the people believed to have civilized Persia, and was also repeated by the Western orientalists who considered Arabic literature as the first chapter of neopersian literature, representing neoiranic poetic art such as an already mature Minerva, and speaking of a single Islamic literature expressed in various languages. According to this presumption, the Persian language without Arab loans would even be an arid and inexpressive idiom.

Perhaps for those who consider the metric of the neopersian language a derivation of the Arab one, stating that poetry in Persia arises after the attack of the Muslims and that the first chapter of a Neopersian literary history is Arabic literature, to then call the characters with which the "Arab" Neopersian is written, it is not necessary to write a history of Persian literature. Obviously, according to this vision, it is better to be content with a general history of Islamic literature, compiled according to the criteria that were applied in the nineteenth century to the interpretation of oriental cultures and particularly that of Iran.

Neopersian literature, which extends to our days and is a continuation of the Middle-Persian with a detachment caused by the destruction of the Sassanid Empire (224 dC-651 AD), flourishes in the ninth century in a way still immature compared to the stylistic refinement to which it will arrive almost two centuries later.

The changes in the Middle-Persian metric had already begun in the Sassanid era. Later in the Islamic era, due to the greater knowledge of the Persians of the Arab poetic technique and their passion for the dominant religious culture, some metrical forms of Arab poetry are artificially imitated by the persophonic poets, but this has never met with a remarkable success and was always seen as an exoticism of Arabian dictators. One could say that the best gift of Arab poetry to Persian lyric and even to romance is rhyme. The Persian metric - which derives from the cultural heritage of ancient Persia with later additions and inventions - gradually becomes a skillful tool not only to convey the poetic message, but also to provide an effective basis for the melodic composition of the traditional song. In fact, many guše (types of melodies) of the ancient Persian musical system are based on the metrical forms of poetry. The genres of Neopersian poetry are numerous: from the epic to the pand (the parenetic and sententious genre) and from the lyrical amour to the panegyric and to the satirical genre ...

It is difficult to recognize the object of love of the Neopersian love lyric; moreover, in our literary tradition the presence of a word that has the characteristics of the trobadoric senhal is very rare. For some critics, the Amate of the neopersian lyric, in most cases, is nothing but a male described in a vague and mysterious way. But this opinion is for various reasons refutable and, according to other researchers, the virile characteristics of the beloved, in neo-Iranian poetry, are the result of poetic hyperbole and baroque. One of the factors that have caused endless doubts about the beloved in neopersian literature is the lack of the grammatical gender, even in the case of pronouns. This grammatical characteristic, which is caused by the millennial process of simplification of the Iranian languages, provokes vague perplexities, giving rise to at least five parallel theories in the evaluation of the beloved / or of every single poet:

1. A beloved male for whom the poet has a carnal love.
2. A mystical Beloved who could identify with God.
3. A woman historically existed and mostly angelic, as happens in Italian stilnovism.
4. A set of various loved ones, praised simultaneously or in different periods of the poet's life.
5. A conventional beloved who sometimes identifies with the sovereign.

... Traditionally in the history of classical poetry in post-Islamic Persia, four main styles are spoken of: Khorasan, Iraqi, Indian and ba¯zgašt (return).
The Khorasanic style that embraces the centuries from the ninth to the thirteenth century has its first center in the saffaride and samanide courts, in the regions of Sistan and Khorasan, where a first pleiad of panegyrist poets was distinguished. In fact, the semi-independent courts of Sistan and above all of Khorasan, the proponents of Persian poetic art, tried to counteract the Abbasid Caliphate which, while absorbing the noble customs of pre-Islamic Persia, tried to eliminate its language.
The Iraqi style (13th-15th centuries) instead forms after the decadence of the courts of Eastern Persia and the transfer of Persian monarchies to the most central areas. The Persian stilnovo, called Iraqi for its membership in Persian Iraq (corresponding to the central areas of Persia today), perfected the refinement of the Khorasan school, draws among other things to mysticism, mixing the earthly love to the divine. In this school we find conciliation on the crucial theme of love, between asceticism and eros, between love for God and love for the creature on the basis of a movement from the concrete to the abstract; the loved one is called to mediate the contrast, making himself a connection between the two levels. Thus a sort of humanization of transcendence occurs and in a certain sense the psychology of love is invented, overcoming the rigid patterns of formalism and stereotypy.

The Iraqi style reaches its peak with great poets like Sa'di, Ha¯fez. and Rumi and continues to resist until the beginning of the Safavid period (1502-1736), to then give way to the so-called Esfahanese style, also called Indian (XVI-XVIII centuries). This name derives from the fact that many persophonic poets of the era emigrated to India, welcomed to the court of the Great Moguls. The Indian style expresses a vast, complicated and refined imagination.
After the decadence of the Indian style, one observes the formation of a new school called ba¯zgašt (return), which is similar to a sort of consistent neoclassicism, precisely in the "return" to the style of the teachers of the Khorasan and Iraqi school.

The classical language used in Neopersian poetry over more than a millennium has remained almost crystallized, so that in many cases one can not discern any linguistic difference between a poem composed in the ninth century and another belonging to our age; but we must not forget that we can still trace the stylistic characteristics that differentiate, for example, the style of the imitators of the ba bazgašt school from the manner of the great Khorasan poets. 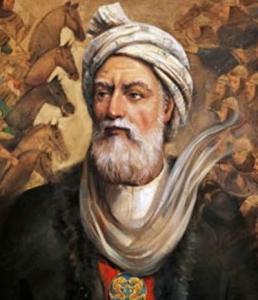