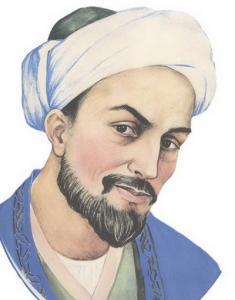 Saadi (Sa῾of) of Shirāz whose full name is Abu Mohammad Mosharraf Al-Din Mosleh Ben Abdallāh Ben Mosharraf, known under the pseudonym of Saadi, was born in Shiraz in 1184. This Iranian poet, writer and famous orator has names such as: "Afsah Al-motakallemin", Master of eloquence, "Sheikh Ajall", Great Sage and is the author of immortal works such as "Bustān" (The Orchard) and “Golestān” (The Rose Garden).

One of Saadi's brilliant characteristics is that he draws a moral lesson from the simplest events in his life. Saadi sees errors and defects, and far from any kind of malicious criticism, in his poems he tries to propose better customs and rules always keeping in mind the question of the link between man and God. Saadi in his works talks about his travels in Asia central, India, Syria, Egypt, Arabia, Ethiopia, Palestine and Morocco. There are volumes and various works of him left but the most important are: "Golestān" in an elegant prose and in current Persian and "Bustān" in verse, on the theme of morality and on the rules of life and a Divān of poems containing: qasideh (mono rhyme-odes poems), ghazal (lyrics) and robāyyāt beautiful quatrains. In addition to Persian writers, his works also influenced Western ones including Walter and Goethe.

Some of Saadi's works have been translated into Italian, among these we can mention the book entitled "Meshkin sim"Or" The silver of a poor heart: one hundred and one ghazal "by Setrag Manoukian.

Saadi had an undeniable influence on the Persian language; to the point that there is a remarkable similarity between today's Persian and the language used by the poet.

His works have for a long time been the subject of study in institutes and old schools as a source of teaching Persian language and literature, and many usual proverbs in Persian derive from his works. He was the first Persian poet whose writings were translated into one of the European languages. The first translation of the Golestān into Italian dates back to the year 1873 and is accompanied by the explanations of Gherardo De Vincentiis and following this in 1889 Italo Pizzi published his version of the Golestān. Many Persian-speaking poets and writers have imitated his style.

Saadi's opera later inspired music as well, and many of his ghazals were sung. In honor of Saadi, in Iran the first day of the month of Ordibehesht, the day of the beginning of the composition of Golestān, was named "the day of Saadi". Numerous literary and cultural institutes have sprung up under the name of Saadi and these always organize literary conferences in his name in Iran and around the world.

His disappearance occurred in 1291 and the mausoleum of this great Iranian poet is located in the "Saadieh" in the city of Shiraz.