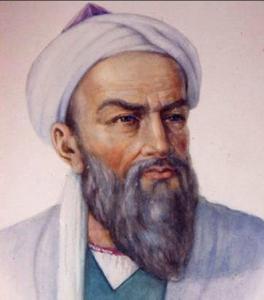 Abu Reyhan Mohammad Ben Ahmad Biruni, a prominent Iranian scholar and mathematician, astronomer, chronograph, anthropologist, indologist, historian, chronologist and naturalist, was born the 5 Settembre 973 on the outskirts of Khwarezm (Corasmia in Central Asia, today's Uzbekistan) and for this reason it became famous as Biruni, that is "outside Khwarezm".

He is the author of numerous works of which one part, more than 146 have been attributed to him. His most important works are: "Ketāb al-Tafhim dar ryāzyāt va nojum" (both in Arabic and Persian, on mathematics and astronomy), "Kitāb al-athār al-bāqiyah" ("Chronology of ancient nations" , a comparative study on the calendars of different cultures and civilizations such as Iranian, Greek, Jewish, Christian, pre-Islamic Arabic and Muslim Arabic), "Qānun-e Mas'udi" (The Mas'ud Canon, a sort of encyclopaedia on astronomy) islamic and "Kitāb al tahqiq ma li-l-hind" (a compendium of indology), "Kitāb al-saydana fi al tibb," on the particular chemical substances and their method of preparation, "Kitāb al jamāhir fi marifat al- jawāhir "on the presentation of mineral substances and in particular on jewels.

Biruni also mastered several languages ​​such as: the Corasmo, the Persian, the Arabic and the Sanskrit and he knew the ancient Greek, the Hebrew of the Torah and the Syriac and he edited the translation of numerous books from Hindi to Arabic including: Siddhāntā, "Al mavālid al-saghir" (name of a famous Iranian astrologer of the Islamic world).

He also translated stories from Persian to Arabic. Among these we can mention the following: "Shādbahr", "Ein al hayāt", Tale of "Urmazdyār and Mahryār and also the story" Sorkhbat and Jangbat ". Abu Reyhan Biruni is the author of numerous inventions, discoveries and researches including: a scale to measure the specific gravity of solids and also the definition of the quantity of gold and silver in compound substances, the artesian well, the physical characteristic of diamond and emerald , the possibility of emptiness, the creation of the geographical sphere and so on. Biruni was a contemporary of Abu Ali Sinā and together they discussed and exchanged opinions.
Places, squares, institutions, associations, universities, statues in Iran and in the world bear his name. In January 2009 in the courtyard of the UN office in Vienna was placed a kind of four-arched pavilion that is a combination of architectural styles, in which Achaemenid and Islamic decorations are visible and inside there are statues of four Iranian philosophers, Khayyām, Abu Reyhān Biruni, Zakariyā Rāzi and Abu Ali Sinā.
He switched off the 13 September 1048 in Ghazna, Afghanistan.