Mourning traditions and ceremonies of the month of Moharram in Iran

the month of Moharram: The most important and moving religious custom and ceremony in Iran, is the one that commemorates the mourning for Imam Hossein (that peace be upon him), nephew of the Prophet of Islam, third Imam of the Shiites and his family and his companions during the month of Moharram and the day of Arba'een. This very ancient ceremony is linked to the episode of the 61 year of the lunar Hegira in the Karbala desert, in the current Iraq. The funeral rite begins from the first day of Moharram and reaches its peak in the late morning of the day of Ashura. At sunset and during the evening of this day, this funeral lull continues and takes on the name "Shâm-e Gharibân[2]". Also on the twelfth day of the month of Moharram a ritual called "takes place"Sevvom-e Imam Hossein"(Third day of mourning of the Imam Hossein). This ceremony is also celebrated on the sixteenth day of the same month with the name "Haftome Imam Hossein"(Seventh day of mourning of the Imam Hossein) and the twenty of the month of Safar with the name of"Arba'een"[1] . The various mourning ceremonies of the month of Moharram e Arba'een they take place in various ways in different parts of Iran. The funeral lament of the Moharramin addition to religious dimensions, it also has political and social aspects. This month, the late Shiite of Iran always manifests spontaneously. In the mourning days of the Moharram to celebrate this eternal event, the large and small cities of Iran change their appearance considerably and are dressed in black. Black and sometimes green flags and banners are raised at the entrance and on the roof of the tekyeh, mosques, houses, buildings, offices and main roads. 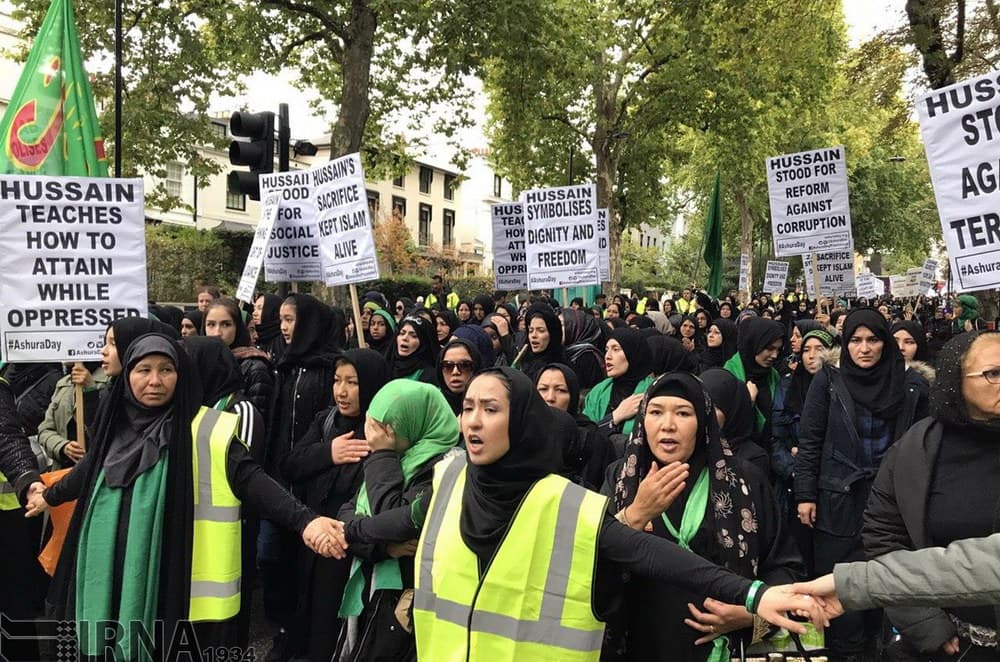 Women and men, old and young, wear black and in particular around noon on the day of Ashura , some cover faces and hair with mud. In these days women and men, especially the young, gather in the mosques, in the main streets and in the tekyeh and reciting elegies with chains and hands are scourged back, head and chest. The incredible thing is to see a multitude of people who are men, women, elderly, young, large, small, emotionally and unanimously next to each other reciting funeral laments, and preparing various foods and hot drinks. and cold, they offer everything for charity to the participants in the ceremony and to all the social classes of society. The foods usually offered for charity are: khoresht-e gheimeh, âbgusht[3], adas polow[4], zereshk polow,[5] ghormeh sabzi[6], halim, various types of soups, various types of halva e shole zard. Fight your chest, scourge yourself with chains, recite sad verses, organize theatrical performances known as ta'zieh, preparing and distributing food for charity, are common customs and rituals during Moharram and l 'Arba'eenbut these take place in different forms in the cities and areas of Iran and in some cases in one or two areas in a particular form; here some of the most important customs and rituals will be presented. The first funeral ceremony of the Moharram celebrated by Jaber Ansari on the fortieth day after the martyrdom of the Imam Hossein (that peace be upon him) and his companions, with alternating vicissitudes has continued to this day. The days of Tâsu'â, Ashura and Arba'een, in Iran are national holidays and all offices, both state and non-educational centers, shops, bazaars, cinemas, theaters etc ... are closed. On the day of Ashura staying at home is not acceptable; in fact, all of them go down the street to recite the funeral lamentations and to express each one their own pain.
In the months of Moharram e Safar, no type of marriage is celebrated.

[1]The 20 Safar, the second month of the Islamic calendar, the Shiite world and not only, commemorates theArba'een, or the fortieth day after the martyrdom of Imam Hossein and his 72 faithful companions. On this occasion pilgrims from all over the world gather in the Iraqi city of Karbala to commemorate the tragedy that took place in the 61 year of the lunar Hegira.

[2]Lett: "Night of strangers", indicates the night following the day of Ashura in which the family of Imam Hossein and his companions, tired and hungry, sat in solitude for the whole night, thinking of the loved ones lost in the unjust battle.

[3]Lamb soup cooked with vegetables, potatoes and tomatoes and accompanied by bread.

[5]Rice with saffron chicken and doormat.

The châyyeneh rite of women

The preparation of a saghakhane

Column content
To share
Tours
We use cookies to ensure that we give you the best experience on our website. If you continue to use this site we will assume that you are happy with it. Ok