The use of precious stones in the traditional way in Iran has a history of a few thousand years and was habitual since ancient times. The development of the country, the richness and interest of the population towards a life full of opulence and sumptuousness together with good taste, meant that precious stones and ornaments were a source of attraction for the people of Iran. One of Iran's decorative-crafting industries has the name of "scraping precious and semi-precious stones" such as emerald, amethyst, agate, turquoise, and opal. These stones that are found in abundance in Iran and after being scraped and placed in a pendant of gold or silver, acquire a greater value. Scraping is performed with a special electric machine. After giving the stone the desired shape, it is smoothed and set in the ornaments of jewelery such as rings, necklaces, bracelets, earrings and so on. Research has also been done on the healing properties of the stones and this has led to a great spread of this art. The stones in the raw state (to put it as the experts of this subject, in the living state), are extracted from the mine and after having taken into consideration the model or the designed design, they are scraped. Iran, from the point of view of the geological structure, is located in an area that due to the abundance of mineralogy is in a very favorable position, so much so that in Iran at least 39 types of stones are known. Mashhad has extraordinary mines and has therefore been chosen as the world gemstone city by the World Craft Council.
The weaving of the Siāh chador
Siāh chādor (lett. Black tent) is a type of tent made from the hair of the black goat and sewn by nomad women. These populations have specific places for stopping in summer and winter and usually live and rest under these black tents. They are always sewn using goat hair and this is important for some reasons; first because they have advantageous properties in case of rain and usually rainwater does not enter from the surface of the tent. Second because goat hair is within reach and cheap. Thirdly, because they are light and are easier to collect and transport than canvas curtains. In summer on sunny days, rest in these tents is pleasant. The name of the nomads' house is called Alāchiq which consists of two parts. The upper part of the tent (its roof) is called "siāh chādor" and is woven with the hair of the goat. The other part is the adjacent wall called "CHiQ or CHIT" which is created with a combination of bamboo and hair. Each tent is made up of a few "lats" and each of these is a ribbon woven from the hair of the black goat. In truth the "lat" is a piece of the siāh chādor. The women who sewed the ribbon-shaped "lats" with a traditional instrument are dedicated to weaving in their place of stay. The width is between 40 and 60 centimeters and the length sometimes reaches 6, 10 or 15 meters. The women, after weaving the "lats", sew them together on two sides until they gradually take on the appearance of the black tent. Among the tribes and nomads of Iran these are woven in different sizes and shapes. The weaving of the siāh chādor is part of the local craft of the nomads of the regions Kahgiluyeh and Buyer Ahmad, Sistān and Baluchistān, of Kermānshāh, of Ilām and of Khorram Ābād.
The incision
This art consists in the decoration and engraving of drawings on metal objects, in particular on copper, gold and brass, in other words it is a type of carving and creation of lines and drawings using a chisel and hammer blows on metal objects. Copper, due to its softness and malleability, is more used in the art of engraving than other metals. In this ancient and durable manual industry the drawings are engraved on metal objects. The work tools of the engraving artists consist of a series of special chisels and a hammer. Engraving variety
1. 2 relief work. 3 semi-relief machining. 4 minimum engraving. 5 carving. Mesh processing
The art of engraving in Iran has a long history. Esfahan has always been and still is among the important centers of this art and currently most of the craft workshops of Esfahan they are composed of copper and brass engraving laboratories and the number of workers in this activity compared to the others is greater. The ancient engraved objects dating back to different periods are ornamental parts of museums and private collections.
Creation and engraving of silver
Arranging and creating silver objects and engraving them was a widespread art since ancient times and currently in the cities of Shirāz, Esfahan, Tabriz, and Tehrān there are groups of artists involved in this field. 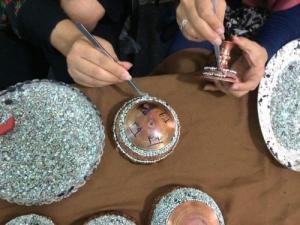