Geographic context
The 31st region of Iran is the Alborz Region, located south of the homonymous mountain range and west of Tehran. This region officially constituted the 7 Tir 1389 of solar hegira with the ratification of the Parliament of the Islamic Republic of Iran. The name of this new region, it has been said, derives from the Alborz Mountains of which a relevant part extends in the north of the territory in question. The capital is the city of Karaj and the other important towns are: Taleqan, Savjablagh and Nazar Abad.
Weather
The climate of this region is cold-humid due to its location, located in the northern part of the central part of the Alborz Mountains, between the winding valleys of the mountain range, such as the Valley of Chalus and those created by the Karaj River.
History and culture
In the remote centuries the region of Alborz was part of the domains of ancient Persia and the territories of Media. Throughout history this region has witnessed many events and changes due to its proximity to three major centers, namely the Caspian Sea area to the north, the Qazvin district to the west and Rey's district to the east. Many documents, historical sources and archaeological remains show that this area was inhabited even in pre-Islamic times. In the eighth century of the lunar hegira, Hamdollah Mostoufi considered Kan and Karaj as lands belonging naturally to the city of Taleqan and, mentioning the waterways of Persian Iraq, describes a river whose peculiarities precisely coincide with those of the River Karaj. In the period in which Aqa Mohammad Khan, ruler of the Qajar dynasty, made Tehran the capital of Iran, the city of Karaj became more prosperous and important every day due to its proximity to the capital. In fact, we can say that the most flourishing period in this area was that of the Qajar, especially during the reigns of Fath Ali Shah and Naseroddin Shah.

On this page, check out the tourist attractions in the Alborz region for unforgettable and safe travel 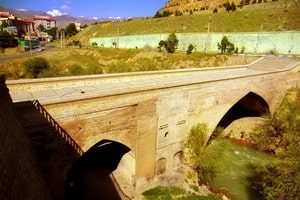 Other historic and tourist centers in this region include: the Kalak Fire Temple Hills, Dokhtar-e Shahrestanak Castle, the Morad Tepe Mountains, the Meidanak-e Moghuli Tower, the Bridge and the Caravanserai. of Shah Abbas, the Safavid Bridge of the village of Varyan, the stone remains of the Takht-e Rostam Fire Temple, the tower-shaped Mausoleum of the village of Kordan, the Heljerd Mosque, the Historical House and the Dr. Mohammad Mosaddeq, the Palace of Soleimaniye, the Stone Tower of Gachsar, the Waterfall of Kor Kabud, Lake Evan, the Cave of Borj, the Iced Cave of Morad, the Garden of Tulips of Gachsar, the ski resort Dizin and the Amir Kabir Dam.