The Mazandaran region is located in the north of the country, in the coastal area of ​​the Caspian Sea, and its territory is divided into two contexts: the coastal plains and the mountain area. The capital of the Mazandaran region is the city of Sari and the other main urban centers are: Neka, Amol. Babol, Behshahr, Tonokabon, Chalus, Ramsar, Qaem Shahr, Mahmud Abad and Noshahr.

The weather conditions of the Mazandaran region are influenced by the geographical latitude, the height of the Elborz Mountains and the altitude of the land from the sea level, these factors also determine two climatic contexts: the climate of the Caspian coast, characterized by a hot summer season and humid and from a temperate and humid winter season; and the climate of the mountain areas, characterized by harsh winter months, with the possibility of frosts, and by temperate and short-term summer months.

From the archaeological studies conducted in the caves of Kamarband and Hutu, near the city of Behshahr, it seems that the human presence in the area of ​​Mazandaran dates back some 9500 years BC. Today's Mazandaran region, in the past, was part of a vast territory that in ancient texts was mentioned under the names of 'Farashuragar' and 'Patiskhavargar', instead in the inscriptions of Bisotun of the Achaemenid epoch it was registered with the term ' Pateshvarish '. The Tabari and the ancient populations of other lineage, but originally from this region, were known as the most skilled warriors, archers, slingers, swordsmen and spearmen, in fact, were enrolled in the armies of the Achaemenid emperors who were at war with other powers of the era. The ancient Greek geographer Strabo mentions this region with the name of 'Parkhavateres'. Since ancient times, the region of Mazandaran - which in the past was also known as the Tabarestan - was considered as a strategic area by several ruling families, due to the favorable climate that they found there. In the texts of ancient historiographers, Atu Fardat (or Farhad Parter) was remembered as the first ruler of the country of Tabarestan. Because of the proximity to the government and the lands of the Parties, the Tabarestan region remained in fact under the control of the Arsacid dynasty until its fall. The term 'Mazandaran', which from the geographical point of view indicated a significant part of the country of Tabarestan, became the new name of this region from the seventh century of the lunar ego. Many famous dynasties of the past took possession of the territory of Mazandaran, such houses were: Al-e Qaren, Gavbare, Paduspanan, Bavandasepehbadan and Al-e Vashmgir or Al-e Ziyar. Also Tahiridi, Saffaridi, Samanidi, Ghaznavidi, Timuridi, Safavidi and the Qajar dynasty were among the sovereigns who controlled this region, considering it one of the countries of Iran. For historians one of the relevant characteristics of the Mazandaran region is to have accepted the Shiite Muslim faith without the use of force.

The images in this section are in the update phase and will be published as soon as possible. 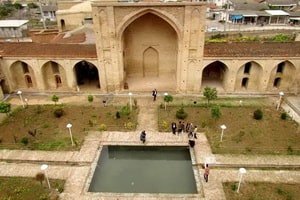 Palace and garden of Rāmsar

Relief with the image of the Shah

The main handicrafts and souvenirs typical of the region of Mazandaran are: kilim, jajim, dishes and objects in terracotta and ceramic, plates and statues in wood, hair and felt fabrics, various types of jams and pickles, various types of syrup of Bahar Narenj (spring oranges) and sour cherries.

The rite "barf chto the"

In a mountain village named Asak, ninety kilometers northeast of Teheran-Âmol, every year in the middle of the month of Ordibehesht[1], the ritual called "takes place"barf chto the"Whose purpose is the conservation of water necessary for the animals in the warm seasons of the year. The locals, during the ritual, clean the road of Nâseri (the road that leads to Barf Châl) and dredges the moat of Barf Châl. Then with the shovel and crowbar breaks the ice, loads it on his shoulders and throws it into the ditch. This day for the inhabitants of Asak is very important and propitiatory. In past years in the absence of water sources they decided to dig a large moat to preserve it. The diggers were very busy digging but while they were working they came across big hard stones losing all hope. Seyyed Hasan Vali, a wise and devoted of the ninth century of the Hegira, passing by this village said to their inhabitants: "dig where I put my staff and promise in case of success that every year during the course of the ritual"barf chto the"You will offer people cheese and honey and sacrifice a lamb.
[1]Second month of the Iranian solar calendar, from the 21 April to the 21 May.

The government of women (the modar-shâhi rite)

On the day of barf châl, the village of Asak, ninety kilometers northwest of Teheran-Âmol, the men leave the village and for a day the women take over the government of it choosing among themselves a person as governor of the a city that knows how to administer, give orders, and is physically robust. The governor also chooses some young girls to oversee public affairs. These overseers wear the clothes of the old soldiers or those of today's soldiers and commit themselves to perform their duties. On this day no man has the right to enter the village, obviously the sick and the elderly can stay in the house as long as they do not face the window or go to the terrace. Even law enforcement agencies do not allow people to enter the village. The orders of the governor are obligatory and she who does not obey is punished, that is, she is mounted on a donkey without a saddle on the contrary and is made to turn and the other women mock or are ordered to prepare sweets and distribute them to the villagers. At the beginning of the day the women in front of the house of the governor begin to dance and stamp her feet until she goes out and goes with them to the village tekyeh and there begins to give orders. They all have lunch together and after lunch when they return, the men are dedicated to daily chores.